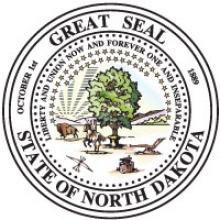 From the time of its ratification in 1889, North Dakota’s Constitution has always contained the same detailed description of the state’s Great Seal. Now found in Section two of Article XI (titled General Provisions), the description of the Great Seal was initially located in Section two of Article XVII (titled Miscellaneous) in the 1889 version of the Constitution. Some of the wording contained in the Constitution’s description is the same as that used for the territorial seal approved on January 3, 1863, by the Legislative Assembly of the Territory of Dakota.

The description reads as follows: A tree in the open field, the trunk of which is surrounded by three bundles of wheat; on the right a plow, anvil and sledge; on the left, a bow crossed with three arrows, and an Indian on horseback pursuing a buffalo toward the setting sun; the foliage of the tree arched by a half circle of forty-two stars, surrounded by the motto "Liberty and Union Now and Forever, One and Inseparable"; the words "Great Seal" at the top; the words "State of North Dakota" at the bottom; "October 1st" on the left and "1889" on the right.

The October 1 date was the day the voters approved the state's constitution by a vote of 27,441 (77%) to 8,107 (23%). Research has failed to reveal the reasons the selected symbols were chosen. As a result, various theories have been advanced over the years. For example, the tree has been identified as an American Elm. However, the American Elm was not adopted as the state’s official tree until 1947. The three bundles of wheat could represent the three branches of government - executive, legislative, and judicial. The plow, anvil, and the sledge may make reference to the agricultural background of the state and to its strong work ethic. The bow and arrows, buffalo, the Indian on horseback, and the setting sun could be reminders of an integral segment in the history of the northern plains. The motto is a quote by Daniel Webster.

Although North Dakota became the thirty-ninth state, the seal has forty-two stars across the top. Since it was not known at statehood as to which "number" North Dakota would be, it’s assumed the stars represent the forty-two states which would comprise the Union by the end of 1889.

To more clearly define the acceptable uses of the Great Seal and to end the dependency on the opinions, S.B. 2448 was passed by the 1995 Legislative Assembly. The bill gave the Secretary of State greater flexibility and authority in carrying out the custodial responsibilities related to the Great Seal. In addition, it specifically prohibited the use of the Great Seal for political purposes. The existing law was also amended to allow the Great Seal to be reproduced, with the concurrence of the Secretary of State, on items offered for sale as gifts and souvenirs by the State Historical Society and the Parks and Recreation Department. The 1997 Legislative Assembly authorized the Great Seal on business cards for state employees. (S.B.No. 2150)

Disclaimer for the Great Seal of the State of North Dakota

The North Dakota Great Seal is the state's only symbol that is protected by state law (Section 54-02-01 of the North Dakota Century Code). It cannot be reproduced or modified in any manner for use in any commercial applications. For more information regarding its use, contact the office of the North Dakota Secretary of State.